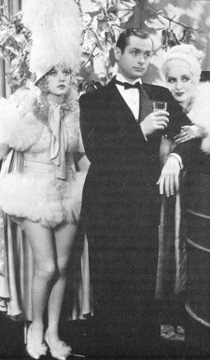 Blondie of the Follies

Songs:
Why Don't You Take Me.

Synopsis:
Blondie (Marion Davies) and her best friend Lottie (Billie Dove) live in a tenement in New York. Molly meets a handsome playboy (Montgomery) who sets her up in the follies. Changing her name to Lurlene, Lottie returns to flaunt her new lifestyle. Blondie returns with Lurlene to her penthouse and meets Montgomery herself. There is a mutual attraction and you know what happens next. Lurlene is furious and makes Blondie promise that she'll stay away from Montgomery.

There is a wild party in Blondie's apartment. In a hilarious moment, Davies and Durante do a "wicked" take-off of Barrymore and Garbo in "Grand Hotel". Marion, always the gifted impersonator, throws her head back and says "I van to be alone...."

Blondie's in the follies now, much to Lurlene's disgust. Enraged with jealousy, Lurlene tries to kill Blondie in the middle of a dangerous stunt on stage. Blondie survives but is crippled. Blondie gives a heart tugging good-bye speech to her stage friends as she is forced to move back home to the tenement.

Montgomery (and a bevy of doctors from around the country) invade Blondie's home in the middle of the night with news that her legs can be operated on and she has a chance of walking once again. The film ends with Blondie happily weeping in Montgomery's arms.