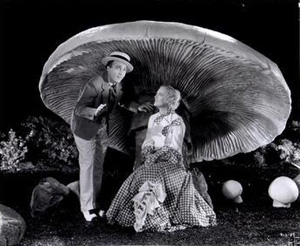 Synopsis:
Sylvia Bruce is a school teacher at Ms. Briarcrofts school for girls. Very strict and conservative, Ms. Briarcroft doesn't allow movies, radio or romance. Sylvia hears Bill Williams (Bing Crosby) crooning over the radio one night and falls madly in love. She runs away from the school on a cross-country journey to find Bill Williams. Once in Hollywood she rooms with Jill (Patsy Kelly) at the Aloha Bungalow.

There is a wonderful dream sequence which Crosby sings "We'll Make Hay While The Sun Shines". Sylvia and Jill get jobs working on the picture that Bill Williams came to Hollywood to film. Marion does a riotous impersonation of D'Orsay singing "Cinderella's Fella" and eventually lands the lead in the film.

Mdlle. Yvonne (Fifi D'Orsay) lures Bill to Mexico out of spite and proceeds to get him roaring drunk. Sylvia and Jill fly down to try to bring him back but he refuses to return to Hollywood. The last scene features a lavish production number which must be shot with a new leading man. Sylvia is distraught, but as the scene begins, Crosby's voice booms from back stage and he emerges, meek and sorrowful, to sing "Our Big Love Scene" to finish the picture in Marion's arms.

Note:  The above photo is from a deleted scene and does not appear in the film.  The mushroom scene was originally part of the "We'll Make Hay" dream sequence.

See the trailer for GOING HOLLYWOOD at: http://www.tcm.com/mediaroom/index/#player_area. Type Going Hollywood into the search field and click on "Go".