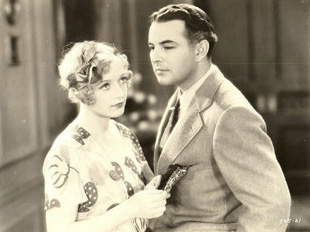 It's a Wise Child

Synopsis:
Marion Davies plays Joyce, a young woman who lives with her Brother and Aunts. She's looked after by her guardian, an attractive attorney who has been caring for her since childhood. After the family trades guesses at where Joyce is and what she's up to, we find out that Joyce is test driving a car. Dust flies high and her poor passenger is white knuckled as Marion weaves and speeds into their yard; a tree brings the car to a grinding halt! Emerging from the twisted wreck of the automobile, Joyce hands a fender to the car salesman and says, "No Mr. Cohen, I don't think I'll buy this car."

Unbeknownst to the family, Joyce's brother has married their maid (Marie Prevost) and she has become pregnant. Joyce is engaged to a wealthy older banker, who employs her brother and promises to keep the family ink black. Joyce is not in love with him, in fact she has a crush on a teller at her finance's bank.

A wild night at a local speak-easy lands the maid, her Uncle (Johnny Arthur), and half the town in the brig after the police stage their first raid. Joyce, in trying to save the maid from going to jail throws a rock through a window so she can ride in the paddy wagon too. Calling on her fiance' to bail them out, it is in jail that Joyce learns that her maid is pregnant with her brothers child.

In trying to help the maid, Joyce enlists the services of a local midwife service. The town snoop overhears the meeting, mistaking Joyce as the girl in trouble. The snoop takes the news to Joyce's fiance, and eventually to the whole town. Joyce still doesn't realize that everyone thinks that she is with child when they start pressing her for answers. She thinks they're referring to the rock throwing incident. They say "Why did you do it?" and Marion shoots back with, "Oh, it was Lent and there was nothing else going on."

In the turmoil, the banker withdraws his proposal and Joyce wastes no time in becoming engaged to the bank teller. She is seen kissing him and when confronted with the question about kissing a man she points out that they were just engaged and that it's "Kiss-tomary to cuss'em," then retreats with "I mean customary to kiss'em."

The maid is discharged to a neighbors house, and the neighbors maid (Polly Moran) takes over Joyce's house. The ice man (played with fervor by James Gleason) is in love with the pregnant former maid, unaware of her conditions (child and marriage). Joyce assists the maid in obtaining an annulment with her marriage to her brother. The maid and the ice man eventually marry.

In the end, Joyce and the teller separate after he losses his job and lashes out in anger. One of Joyce's aunts thinks that the man Joyce has kissed at the speak-easy is her husband, which leads to some funny situations. Joyce and the lawyer realize that they have loved each other the entire time and wed after all the confusion is cleared.

It's a Wise Child is the only released Davies talkie that has never been aired on Television or cable.  The copyright for the stage play is holding up the TV rights.  Laurence Johnson, who wrote the play, died an only child with no children of his own in 1933.  His wife Constance copyrighted the play in 1937 through the Samuel French Co., who renewed the copyright (at least once) in 1964.  The current copyright on the play is good through 2033.  Unless some accord can be reached between Warner Brothers (who currently owns the film) and Samuel French, the movie version will not be available for television.

Note:  Apparently the Samuel French Co. either sold or leased the rights to this property to the American Entertainment Co. of  Beverly Hills.